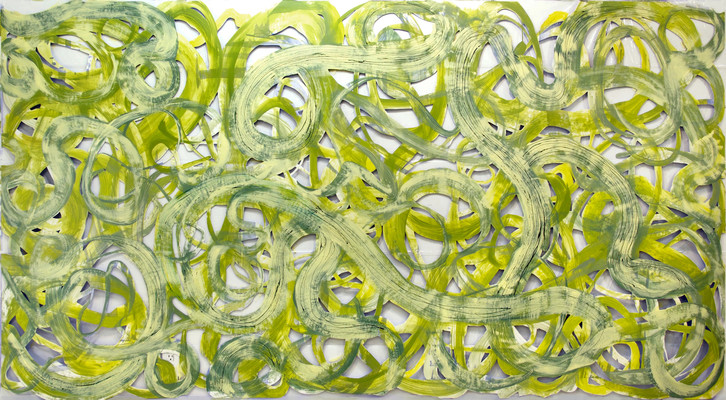 “I see a lot of this work as thinking… a thinking process. That’s all it’s supposed to be, right?”
- Avy Claire

Frank Brockman Gallery is proud to present #twistedbrushstrokes, a solo show of sculpture and works on paper by Avy Claire. This latest series, curated by Lauren Elise Hirshfield, continues Avy’s endless experiments in mark-making. Produced on YUPO and paper these acrylic paintings embrace the casual nature of their essence, a quality Avy revered during the process of making these works. The time spent at a residency with the Virginia Center for Creative Arts this past winter gained her the majority of #twistedbrushstrokes. There she explored the permanent and final nature of a single stroke - can a painting be one mark? How many ways can that one mark be manipulated? The largest paintings, flat abstractions on YUPO measuring 60” x 111”, are most indicative of Avy’s previous work. We begin to see, however, the new thinking at hand; the spaces between, under, and around each stroke have been trimmed away leaving us with a large cut-out, like a single layer of a collage. That idea of trimming Avy describes as like pruning trees. She knows the final product through the extraneous parts. Studying the multiple colored strokes - like paths in a network - the viewer can understand that process of solving a riddle, of revealing the pattern within. 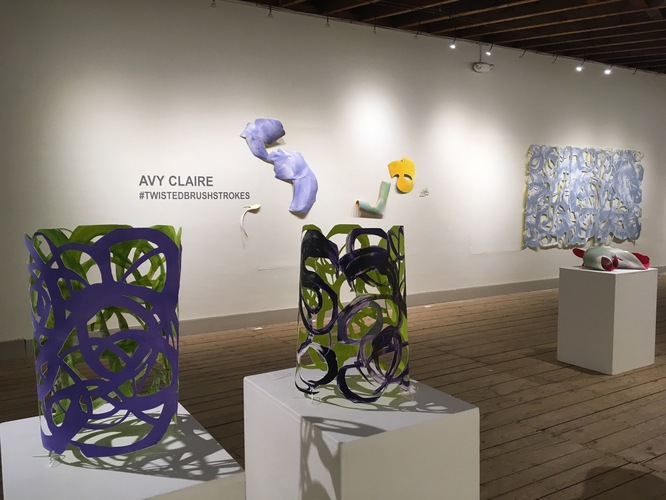 The other smaller paintings, cut out strokes isolated from their packs, further the “pruning effect”. Their clean edges and variable curves sit bold along the white wall, dancing around the gallery like a 1940s jazz accompaniment. They can be oriented in multiple ways and displayed in various pairings. That freedom is as playful and exciting as the work and the process behind them, again highlighting the casualness of the series.

The manipulation of negative space by the sculptures in the #twistedbrushstrokes series is perhaps the most exciting and dynamic of the bunch. Not only are the strokes cut out following her guidelines, but Avy has twisted and warped them into free-standing cylinders and simplistic interlacings. We see a restructuring of form, bringing the 2-dimensional stroke into a 3-dimensional space. They sit carefree on shelves and pedestals, or suspended from the ceiling, weightless yet still wholley “object”. The large cut-out painting in cylinder form glows orange inside and casts a shadow in its wake, almost coming full circle (no pun intended) back into 2-dimensionality. At the core of this series is Avy letting go of as much control as she can to create lines that are innately inconsistent and seemingly arbitrary. When selected under a specific set of trimming rules, these marks become dimensional in a way never seen before in her practice. Like calligraphy, she wants every stroke to feel singular and intentional. The final product is an effortless collection of painted curves.

About the curator:
Lauren Elise Hirshfield is a New York City based gallerist and curator. She co-owns PARADICE PALASE, a project space in Brooklyn, NY supporting emerging and underserved artists.

#twistedbrushtrokes at Frank Brockman Gallery is located at 68 Maine Street, third floor, Brunswick, Maine. The exhibit opens August 4th, 2018 with a reception from 5:30pm - 8pm, and is on view through August 25th, 2018. There will be a closing reception on August 25 from 4-6pm.  Gallery hours are Tuesday - Saturday 11am - 5pm. For more information contact Mark Little, marklittlepainter@gmail.com, 207.844.1485. 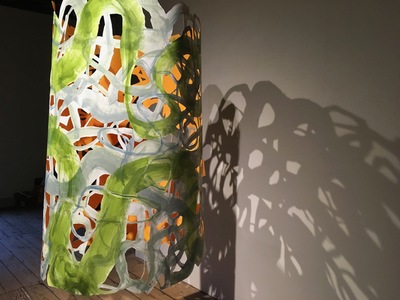 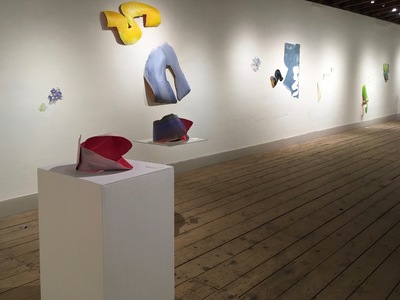 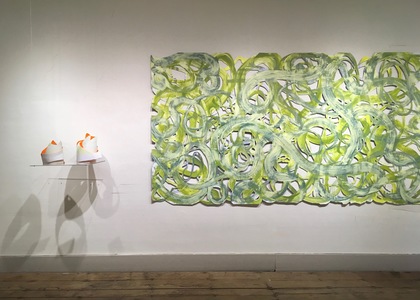 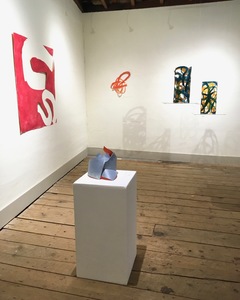 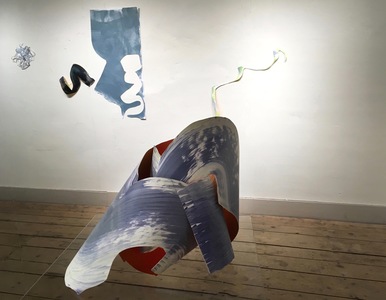 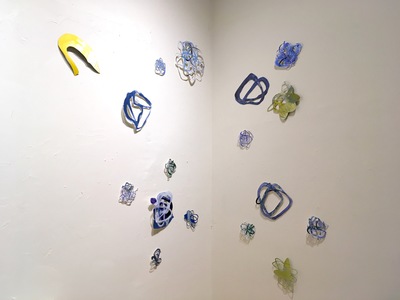 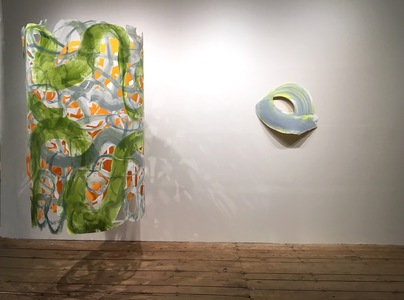 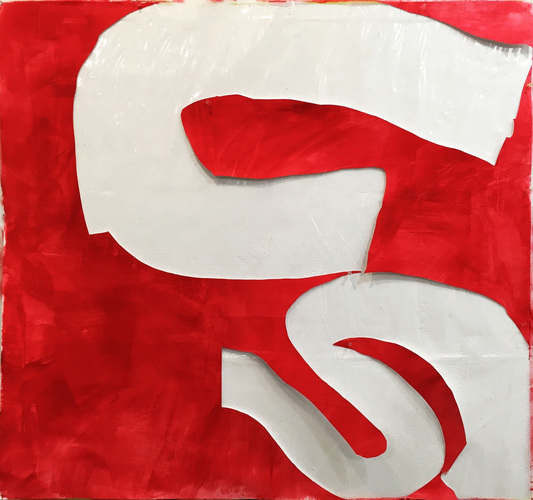 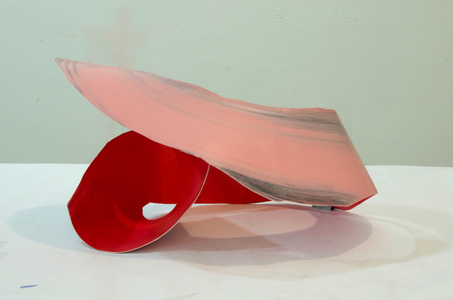 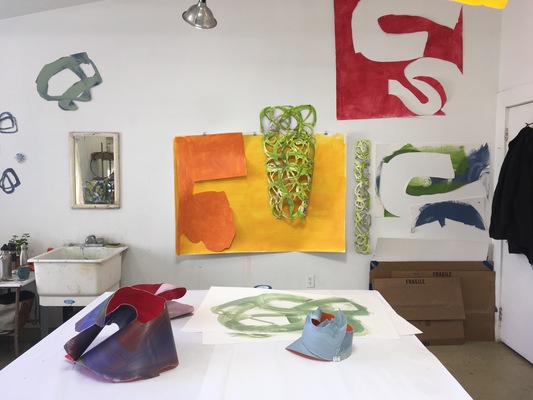 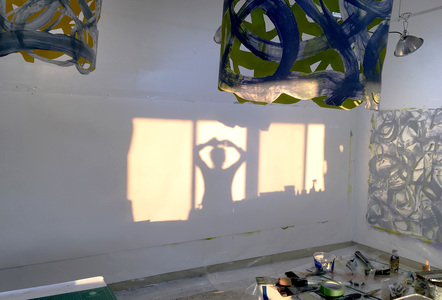